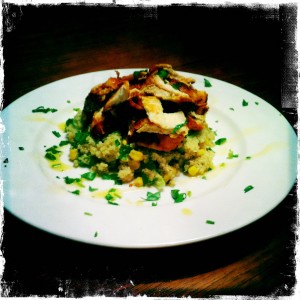 Which is otherwise known as, “I was too impatient to get anything else besides a pack of chicken breasts on my way home from work and yoga, so now I have to use what I have already at home!”   Truth be told, this is how I do most of my cooking.

So, sweaty yoga clothes in the washing machine, I stared at the pantry and spied two things – my favorite tin of Spanish smoked paprika (pimenton ahumado) , and half a bag of quinoa.   Yum.  I started the quinoa going in a saucepan with some water, then rubbed the chicken breast with some olive oil (Spanish, of course), seasoned with salt and pepper, and rubbed with a tablespoon or two of the pimenton (for 3 breasts).  I got those grilling on a grill pan and started on steaming some frozen broccoli and frozen corn that was in the freezer.  Yes, I used the microwave.  It was 7:45 PM on a weeknight and I was STARVING!!  After the quinoa and veggies were cooked, I chopped up the broccoli some and tossed them with the quinoa, dressed with some glugs of Sherry Vinegar and olive oil, salt and pepper.  The chicken was done by this point…chopped it…threw it on top and called it done.

I think if I had put some more thought into it, I would’ve chopped the chicken into chunks and put them on skewers after seasoning them.  They would’ve been more like the “pinchitos” I remember eating and loving so much in Spain.  I also think some small chunks of manchego or a milder goat cheese and some diced roasted red pepper tossed in the quinoa would’ve made it that much more yummier.  Oh well…next time – ¡OLÉ!