To be honest, I feel like I just performed an Easter weekend miracle.   I…ME…with NO bread baking experience to speak of…made THIS loaf of amazing bread: 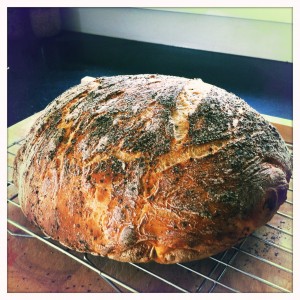 No Knead Bread - Best loaf yet!

A coworker clued me in on an article from the NY Times called “No Knead Bread”, by Mark Bittman (aka The Minimalist Chef who now has his own show on The Cooking Chanel I believe). http://www.nytimes.com/2006/11/08/dining/081mrex.html

This article has been going around from person to person since it was written in 2006.  I feel lucky that someone thought enough of me to pass it along to me!  But I should also say that since thousands upon thousands of people are also using it, not to mention that man has been baking bread for … well, like a really long time … it probably isn’t the Easter miracle I’m making it out to be.  This loaf DID turn out really well though; out of the four or so attempts I’ve done, best so far!

I doubled the recipe and used the medium size Le Creuset cast iron dutch oven I have.  When I did just a single batch, the dough was dwarfed by the pot so I figured it could handle a doubling. 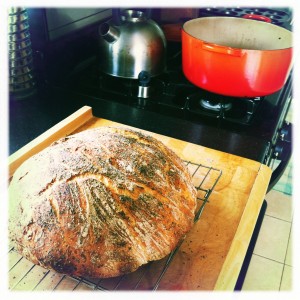 The bread and my favorite pot in the house!

I simply mixed the flour, water, salt, and yeast and instructed yesterday morning, let it sit and practically just through it into the heated pot and this amazing thing came out.  So it kind of is like a miracle.  It sounds hollow when you tap it on the bottom (a sign it’s done), smells amazing, and listening to it crackle as it cools is practically giving me goose bumps!

Now, to get this thing over to my hosts house for The Annual Easter Bonnet Brunchrunch and enjoy some ham with it.

One Response to No knead bread