If you read my last post, you know that I had a jar of preserved lemons sitting on my counter that were ready to go.   You also know that I was going to cook with them for the first time the following night.  Exciting, right?!  Well hold on…  What you don’t know is that I was going to make a dish called a tajine, without…actually…having…a…tajine.   A miracle?  Magic?  No, just plain science I suspect.

What is a tajine anyway?  Or as Cook’s Illustrated spell’s it: tagine.  And  what’s the difference between using the ‘j’ or the ‘g’?!  Anway, according to Cook’s Illustrated (source: http://www.cooksillustrated.com/equipment/overview.asp?docid=10563) :

“A shallower take on the Dutch oven, a tagine has a distinctive conicallid that               makes for a dramatic presentation at the dinner table. According to tradition, the conical shape helps cooking performance as well: As steam rises during cooking, it condenses in the tip of the relatively cool lid (it’s farther from the heat source than most lids) and drips back into the stew, conserving water in the process.”

Read on my friends, because although there were variances in the amount of cooking liquid left, that variance translated to little discernible flavor difference according to their studies.  (Side note: as an engineer I’m REALLY loving my Cook’s Illustrated “Science of Cooking” cookbook I got for Christmas.  Thanks Mom and Dad!!!)   I was cleared to cook a tajine in my lovely enameled cast iron dutch oven.

Now back to those preserved lemons.  First step was the marinade.  The recipe I chose to use (see below) uses the pulp in it.  Yum, extra flavor right? Make sure you rinse that preserved lemon well though.  They are super salty!  And I would consider halving the amount of salt used as well. It can be a lot of salt if you aren’t careful.   After 24 hours, the hard part is done.

No, I take that back.  The next step is to ask a friend over to move furniture so you could put down a coat of floor polish so you can have shiny, pretty wood floors. THEN start cooking as the floor dries so you can reward their hard efforts with food.   A word of warning though.  Keep an eye on your friend and her vodka gingers that she pours for herself or you might end up with tipsy friend.  Oops!   Now all that needs to be done, besides trying to sober up your friend, is to put the chicken with all it’s marinade in a dutch oven (a heavy enamel coated cast iron one works great), add the rest of the ingredients, and let it cook. 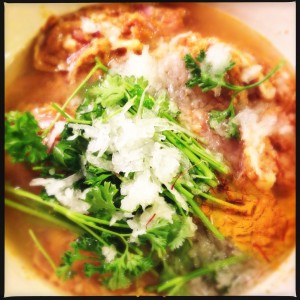 While it’s cooking for 30 minutes, you can slice the preserved lemon skins that had been put aside in the fridge when I made the marinade.  Get that parsley, cilantro, and olives ready as well!   The smell at this point is incredible.

Once the chicken has cooked and is tender, remove it and remove any skin on it.  I had boneless skinless thighs at home so I didn’t need to do this step.  Throw the lemon peel, parsley, cilantro, and olives in the sauce left over in the dish and simmer for 5 minutes or so until thick.  Then pour back over the chicken.  Delicious dinner is served!   I had some left over quinoa, with spinach mixed in it that I heated up and served with it.  A perfect accompaniment!

In a large bowl, mix the garlic, cumin, ginger, paprika, salt and pepper, 1/2 cup grated onion, and the oil. Rinse the preserved lemons, and remove the pulp. RESERVE the lemon peel for later use. Add the lemon pulp to the mixing bowl. Add the chicken. Mix everything together and place in a large plastic bag to marinate overnight in the refrigerator. (Twenty-four hours really gives the chicken the best flavor.)

In a large Dutch oven or casserole, place the chicken and marinade; add the stems of the parsley and cilantro, the rest of the grated onion, the powdered saffron and 1 1/2 cups water. Bring to a boil over high heat, turn down to a simmer and cook, partially covered, for 30 minutes. Remove the cover, stir the chicken and continue to simmer for another 15 minutes or until the chicken is tender. Remove the chicken to a serving dish and cover with foil to keep warm. Keep sauce on stove and begin to reduce.

Slice the preserved lemon peel into thin slices and add to the sauce along with the olives, parsley and cilantro. Reduce until the sauce is just a little thick. This shouldn’t take more than 5 minutes at most. Uncover the chicken and remove the skin from the chicken. (It doesn’t look pretty and who needs the extra fat.) Pour sauce over chicken and serve.