What to bring to a housewarming barbeque after recently returning from Spain earlier in the week?  Something Spanish flavored of course.  But to write about it?  It would run the risk of comparing it to the marvelous food that I blogged about on it’s own page (Todo sobre mi comida).  No, not comparing it…but perhaps breaking the spell that the country of Spain, it’s food, and most importantly the people cast on me every time I go to visit.    This was a thing I did not break, and find it harder to do every time I go.  So I made the potato salad and let them sit in my computer while I reminisced, that is until I was shamed into writing through a simple inquisition from Spain.  So start writing again I must! 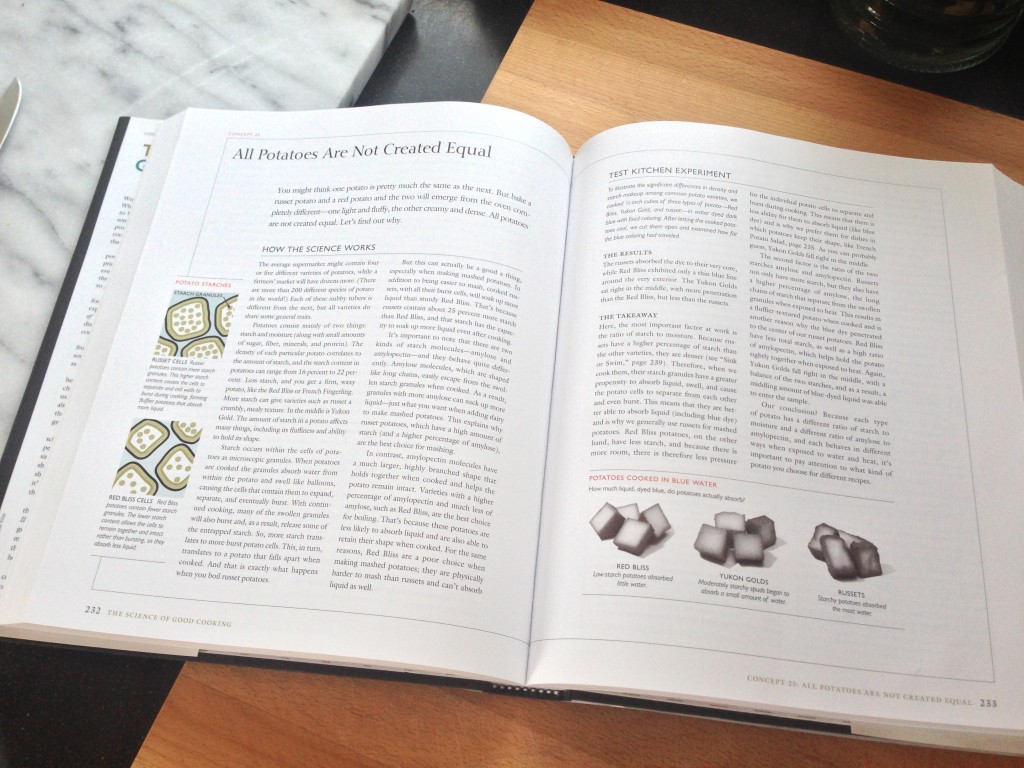 “The Science of Cooking” end all potato salad reference

I came home to an overflowing garden, one of the crops being green beans of the green, purple, and yellow varieties – they were definitely going to have to go in whatever dish I prepared.  And I MIGHT have picked up some potatoes to make tortilla española, so potato salad it was to be.  And any spanish potato salad would have to have garlic and smoked paprika in it.  And extra virgin olive oil, from Spain of course.  It was good that I just happened to have a bottle of it in my house. 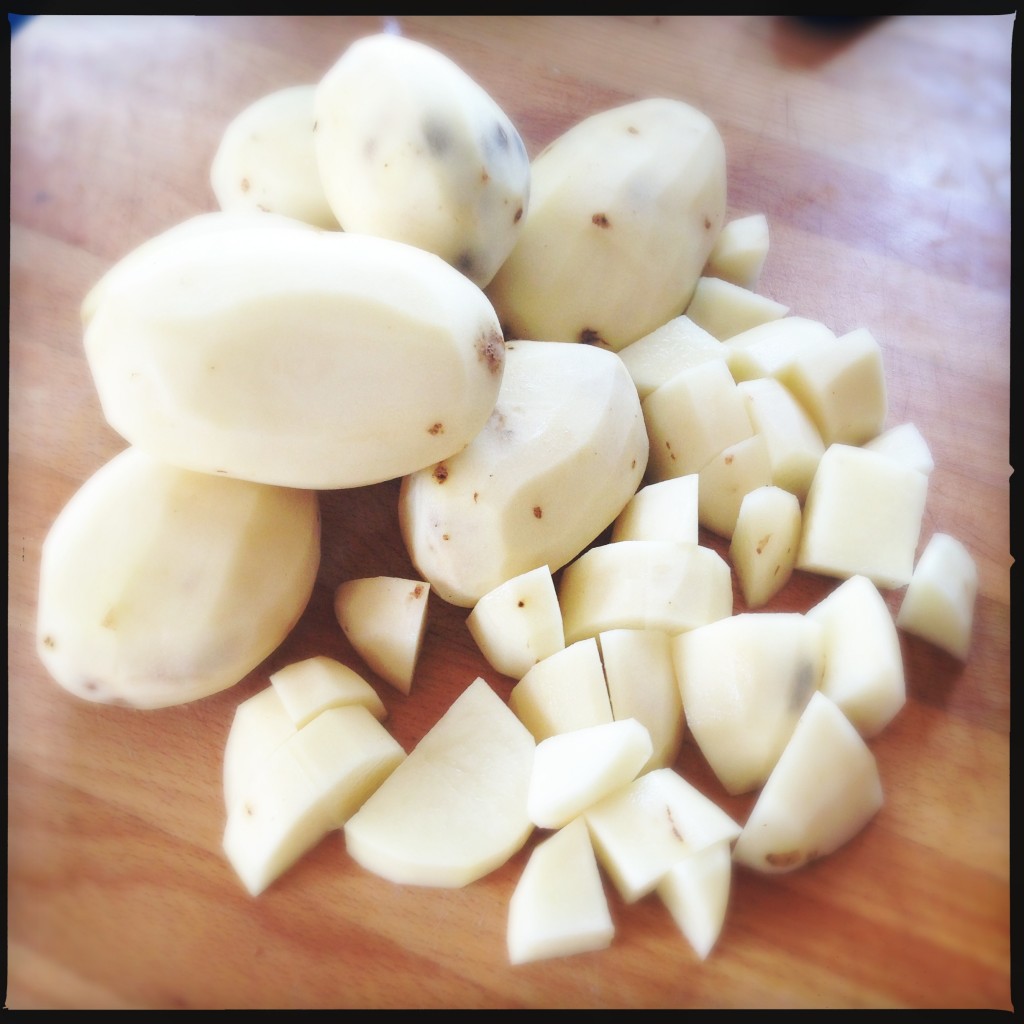 Peeled and cubed, ready to be boiled in cold water.

I blanched the beans and then shocked them in ice water, while the potatoes were being cooked.  It was a little bit of a bummer that the the purple beans turned green when they were blanched, but they were going to work in any case.  As a little bit of a side note, I finally got to use my “Science of Cooking” cookbook by Cook’s Illustrated.  They had over 20 pages on potato salad and the preferred techniques.  Bottom line, if you want a potato salad with potatoes that absorb the dressing, like I did, cube the potatoes and boil them in cold water.  They cook quicker, more evenly, and will absorb all that dressing – scientifically proven! 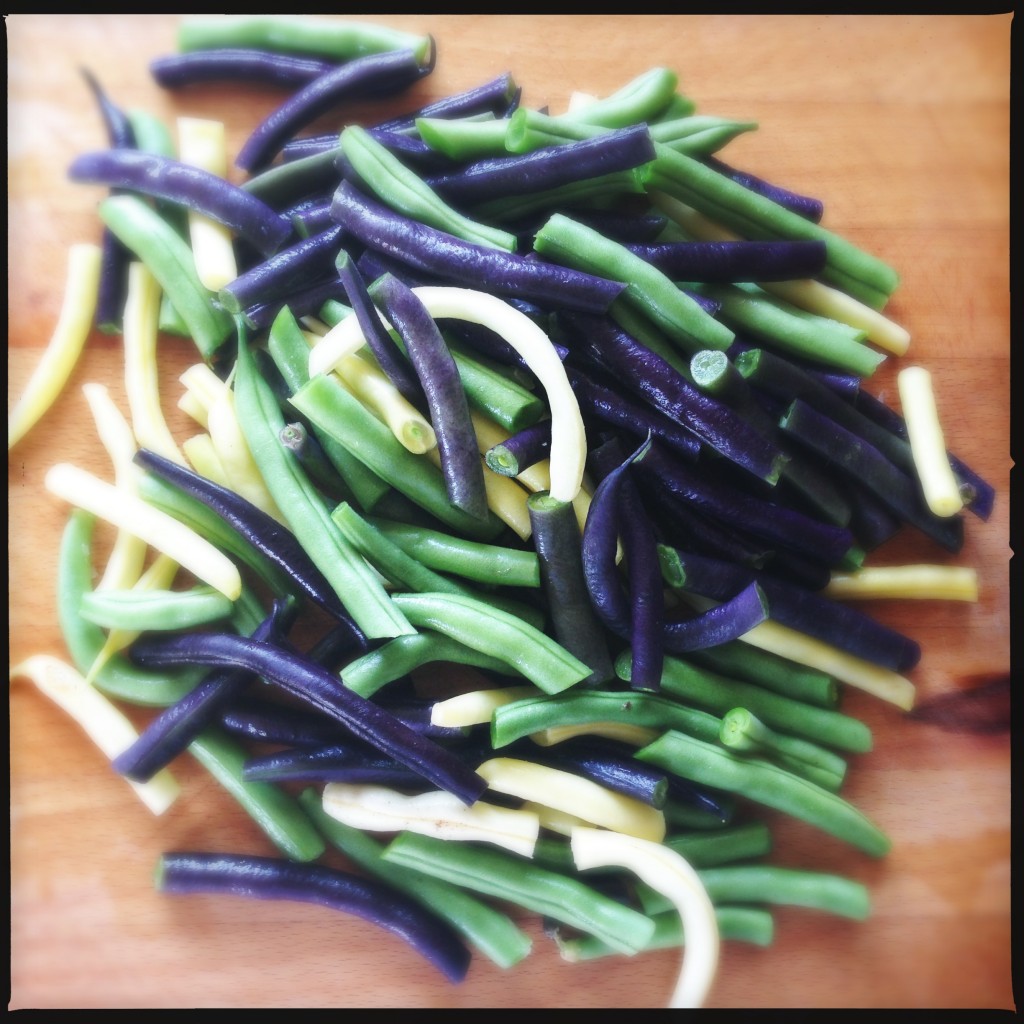 Beans fresh from the garden! 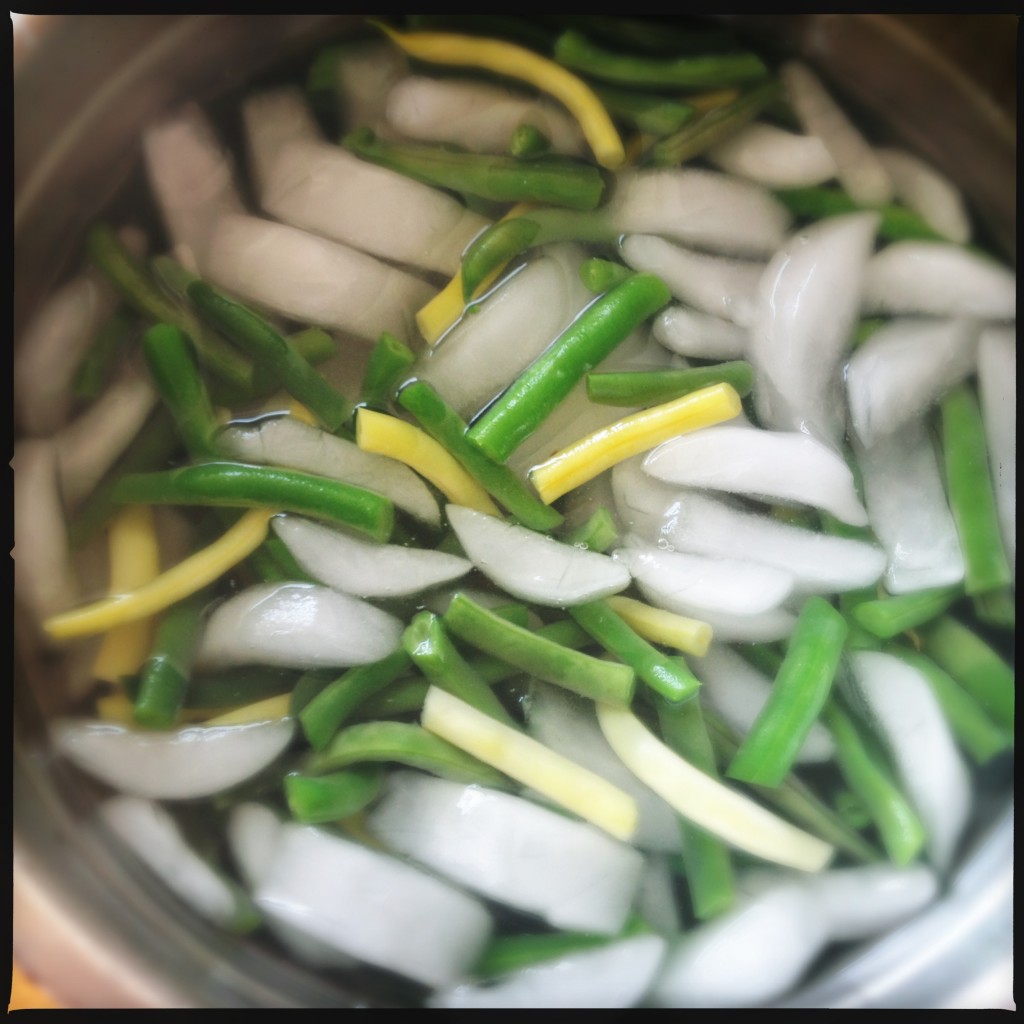 Shocking the beans (notice the purple has gone green)

To make the dressing, I tossed the garlic, sherry vinegar, oil, salt, pepper, anchovies,  and smoked paprika into the blender and whipped it up until it was all incorporated.  Mix that with the slightly warm potatoes, the green beans, and some diced multi-colored bell peppers, capers, and red onion and you have the only potato salad I will ever make again!!!  ¡Buen provecho! 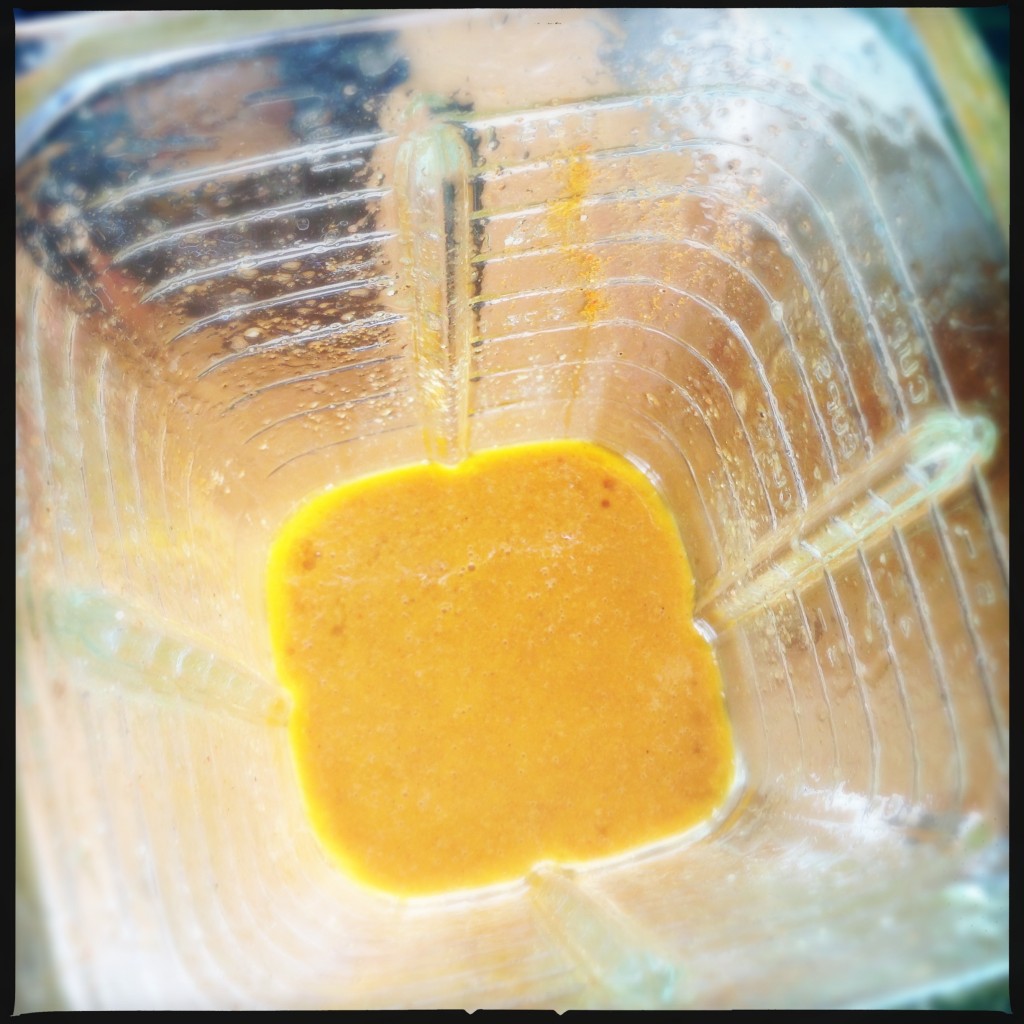 The dressing done in the blender

(Note:  I lie.  I want to make another potato salad soon – the traditional Spanish ensala rusa.  Oh.  And there will be the luau’s potato/mac salad of course.) 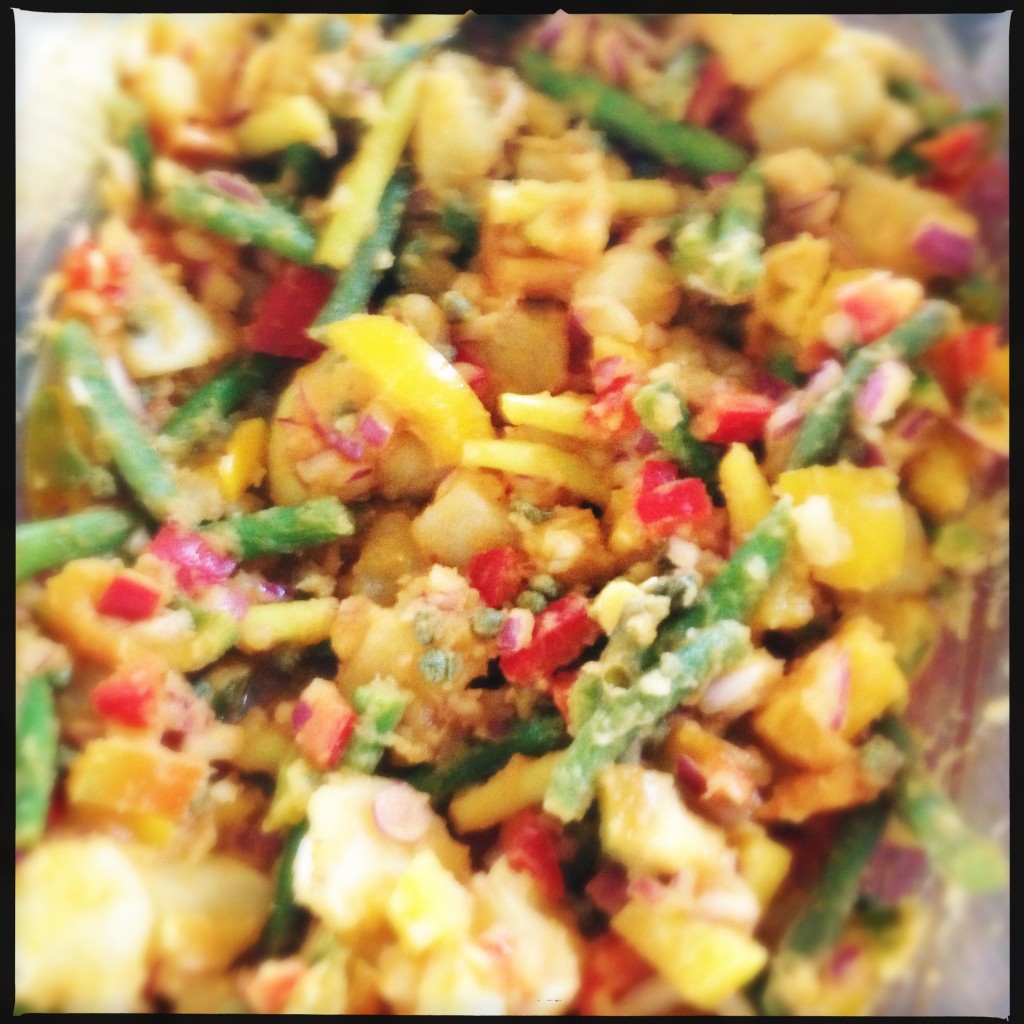 The final product! I almost forgot to take a picture, but snapped a quick on at the party.

Boil potatoes with bay leaves & salt until tender. When the potatoes are done cool them under running cold water. Steam or boil beans for a few minutes. Make sure beans are not overcooked. Cool beans under cold water. In a blender or small food processor blend garlic, vinegar, oil, salt, pepper & smoked paprika (add also anchovies desired) to make the dressing. Once potatoes & beans are cool enough, toss with rest of ingredients & dressing. Refrigerate salad for at least one hour before serving.