Korean Inspired Sandwiches for a hike

It always starts with a simple curiosity, doesn’t it?  A whim, a capricious thought, a lingering wonder, a down right primal urge to know exactly what is being sold in that really REALLY big new shiny store called Zion Market, out on Clairemont Mesa Blvd.    Well  – it happened last weekend. 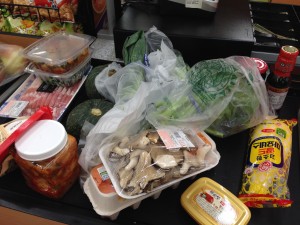 At the check out line of Zion Market, just “checking it out”….oops.

I was in the area getting supplies for a trek in Northern Spain this upcoming spring and had to drive by back Zion Market, so I decided to stop and go in.  My friend who accompanied me to REI decided to skip.  I won’t fault him.  His main dietary staples are bacon and diet coke and I’m pretty sure he would have gone into shock the moment he stepped in the store.  Then I would have to call 911 and go to the ER with him.   In the end, a perfectly good adventurous food shopping trip would have been ruined under that scenario, so I dove in on my own. 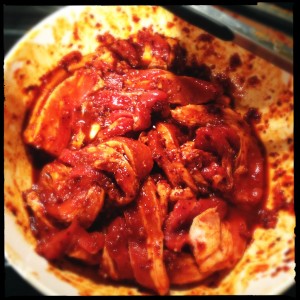 I knew I was in trouble when I had two items in my hand held basket within the first minute.  They were good items though (the classic Korean cabbage kimchi and Korean pancake mix, Kimchjeon) and I was not about to deprive myself of them or the ensuing experience.

I wandered the aisles, marveled at things I had never saw before and equally wanted to try and not try, making mental notes to remember to come back when I was looking for all the special ingredients that are usually hard to find except in this store.  Starches of every kind, beans like I’ve never imagined, crazy amounts of yummy pickled things, and amazing produce!! 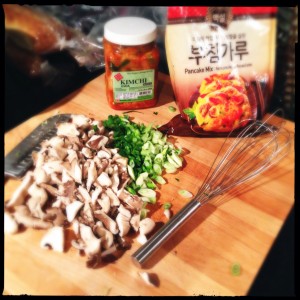 In the end, I made it to the check out with an overflowing basket and some things in my free hand.  I was happy.  Now to cook all this stuff!  And eat it.  Who was going to eat it?!  That’s when the moment of genius struck: make Korean inspired sandwiches and bring them on the hike I was doing the next day with some friends. I wanted to thank everyone for joining me on my first training hike in preparation for El Camino de Santiago in May and I could think of no better way than feeding them. 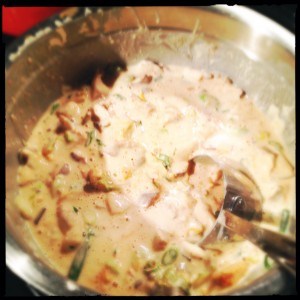 Batter!! It should be really thin with finely chopped veggies. 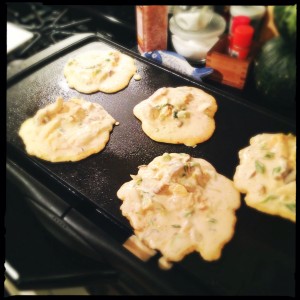 Time to make the Kimchijeon

I got home and set about the task at hand.  First off: marinating the organic kurobuta (berkshire) pork belly in LOTS of chile, garlic, ginger, and other good stuff.  (recipe below)   While that was going, I chopped up the veggies and kimchi, mixed up the pancake batter per the instructions and started frying up savory deliciousness in disk form. It took a little while to get the hang of it.   They need to be small and thin so they are crispy yet tender on the inside.  I ended up switching to a skillet with a little more peanut oil in it for the final batches. 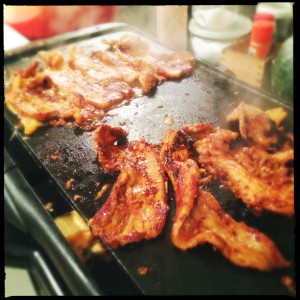 Mmmm…pork belly! Problem is my house smelled like a Korean BBQ restaurant after. Wait…is that really a problem??

Once those were done, the marinated pork belly went on the griddle ala Korean bbq style.  It wasn’t totally tender and delicious after cooking, so the next morning I lined a sheet pan with foil and cooked it at 300 deg F for about 45-55 min and chopped it up into bite sized pieces perfect for a sandwich.

While the pork belly was cooking, I made super thin egg omelets to go with the pancake sandwiches.  I sliced up the ciabatta and baguettes and toasted them after brushing with a little olive oil.  Then it was assembly time: on the ciabatta I put a kimchi pancake, an egg omelet, and a generous squeeze of Asian mayonnaise which is slightly sweeter.   The baguettes got the pork belly, some sliced pickled radish, lettuce, and some of the same mayo. 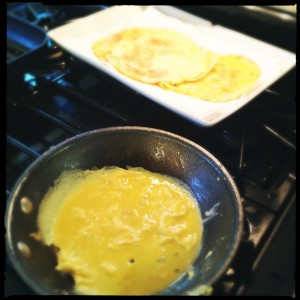 Really thin omelets to go with the kimchijeon 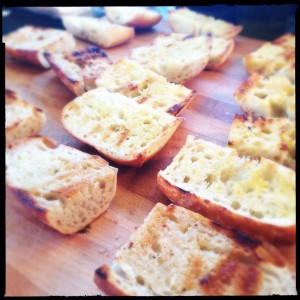 The sammies got wrapped and packed, then put into my new bag I was taking for a test drive on this hike.  At the second peak of the hike (South Fortuna in Mission Valley Regional Park), I surprised everyone with a little lunch. Well, they knew I had food but what it was remained a mystery.    Judging by my leftovers (hardly any…only one pancake and egg on ciabatta, and ALL of the original back up PB&J’s in case there were any picky eaters) the sandwiches were a hit!   That really made my day.  Besides having a great hike on a beautiful day with some awesome people of course.  The hikers were really troopers, with one recovering from a nasty cold,  and good company for sure.

Now, to try to top this for the next hike.  I think burritos were mentioned… 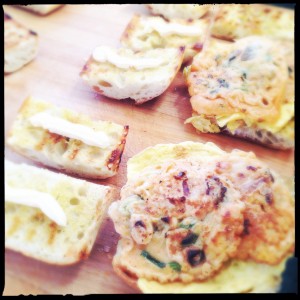 Kimchijeo and egg omelet on ciabatta with mayo 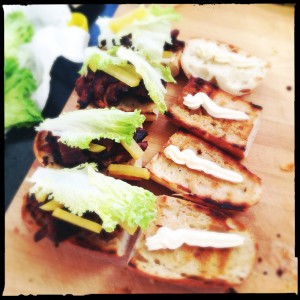 Pork Belly sandwich, with lettuce, pickled radish, and mayo on a baguette

Oh and let’s not forget these little delicious treats I picked up in the food court from a chain called Cocohodo: fresh made walnut pastries with sweet red bean paste and walnuts on the inside.  SUPER YUM!!  And I don’t usually like sweet red bean paste. 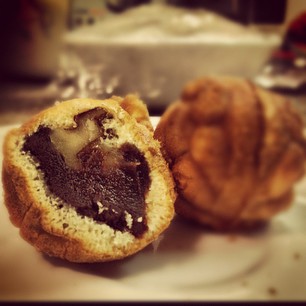 For the pork belly spicy marinade: