If you haven’t noticed, I am a bit mad for macarons.  A bit obsessed one might say.  The delicate almond, egg white, and sugar cookies area  perfect nexus of my passion for cooking, 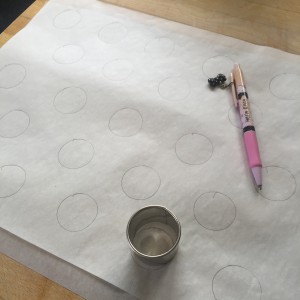 Tracing out circle guidelines on the parchment paper. And yes, that is my Hello Kitty! mechanical pencil

making pretty looking things, and a engineering problem solving.   It really is a dangerous combination, but when the outcome is a macaron that looks picture perfect and tastes just as good, it’s all worth it.  Add to it that I’m usually making them for someone else, it makes it even more worth it.  And there’s no way I could eat an entire batch by myself!  Ok…well I could try but let’s be honest  – that would not end well.

First off – yes macarons are deceivingly hard to make for looking so simple with so few ingredients.  There are a LOT of factors: temperature of the oven, humidity, age of the egg whites, how much to fold in the powdered sugar and almond flour…  Let none of that stop you.  It’s all worth it.  Secondly – these are NOT macaroons.  Notice the subtle spelling difference one ‘o’ can make.  Add one and you are talking about coconut, condensed milk, egg white thing.  Take away that ‘0’ 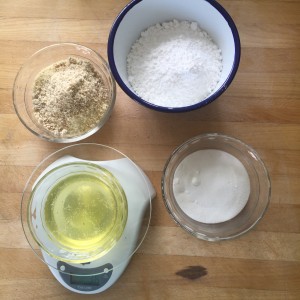 These 4 simple ingredients make up the macaron cookies – amazing!

and you are transported to Paris, to the most beautiful Parisian bakery, picking out the most exquisitely colored and wonderfully flavored delicate pastery/cookie combination that I’m talking about.  Don’t get the two twisted. They are worlds apart.  Worlds, I tell you…

How do you get these little beauties to come out?  Use this recipe, watch LOTS of YouTube videos. And don’t give up. Never give up!  Keep trying, batch after failed batch, until magic happens and then every failed attempt will be worth it.  Doing it on a Sunday afternoon with a 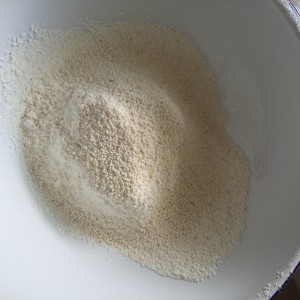 Sifted powdered sugar and almond flour. There are still some lumps to remove…otherwise the cookie will be bumpy. Sad face if that happens. 🙁

Sunday afternoon with a bottle of champagne on ice doesn’t hurt either. Just saying.

I searched for a recipe that had everything measured out by weights and finally found a good one.  Apparently it comes from Sur la Table.Thanks Sur! I also combined several techniques and steps from other recipes that I tried.  So does that make it my own recipe now?   In any case, back to the weights.  It is SO worth getting a little kitchen scale for this.  Oh, and all the other baking you’ll be doing after this.  After all, you’ve mastered the macaron – nothing can be as challenging, can it?!  Then you’ll need the kitchen scale for portion control to help on the diet you’ll need to go on after all the baked goods you’ve been making…and eating. 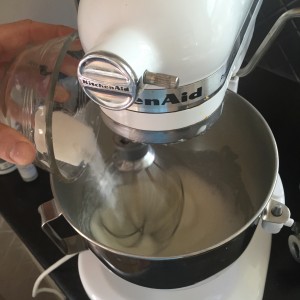 Beat those egg whites and add the sugar slowly! (I add a touch of cream of tartar and use extra fine bakers sugar)

Notes
* The assembled macarons can be stored in an airtight container in the refrigerator for up to one week.*Don’t age egg whites on the counter for three days, no matter what you read.  That’s totally dangerous!  Leave them in the fridge, covered and then bring them up to room temperature before using. 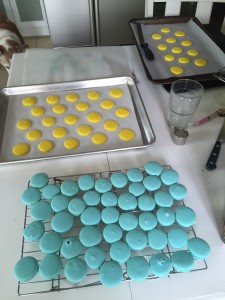 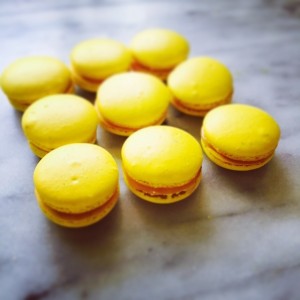 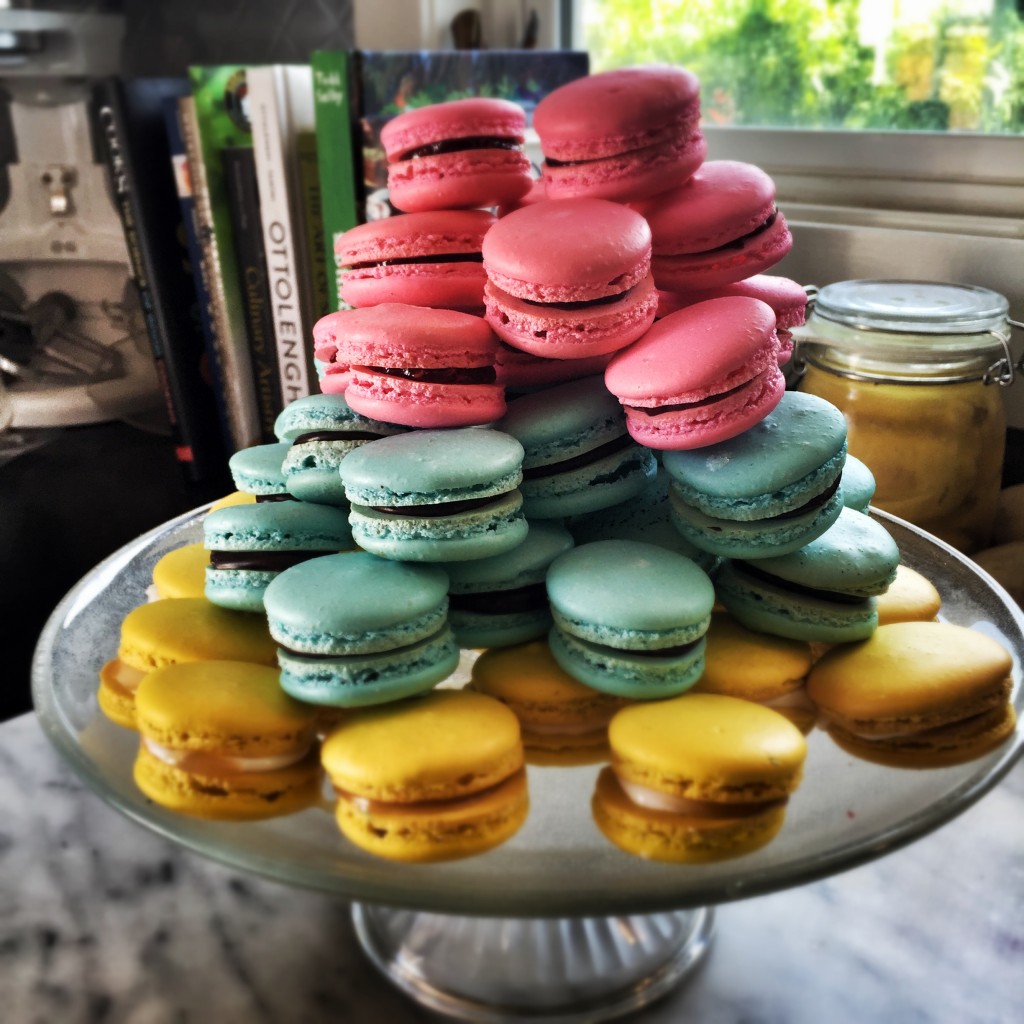 Eat your heard out Ladurée, you fancy and $$ Parisian bakery! Ok yours are good, but I don’t live there…  Lemon meringue, chocolate ganache, and raspberry fillings, from bottom to top. 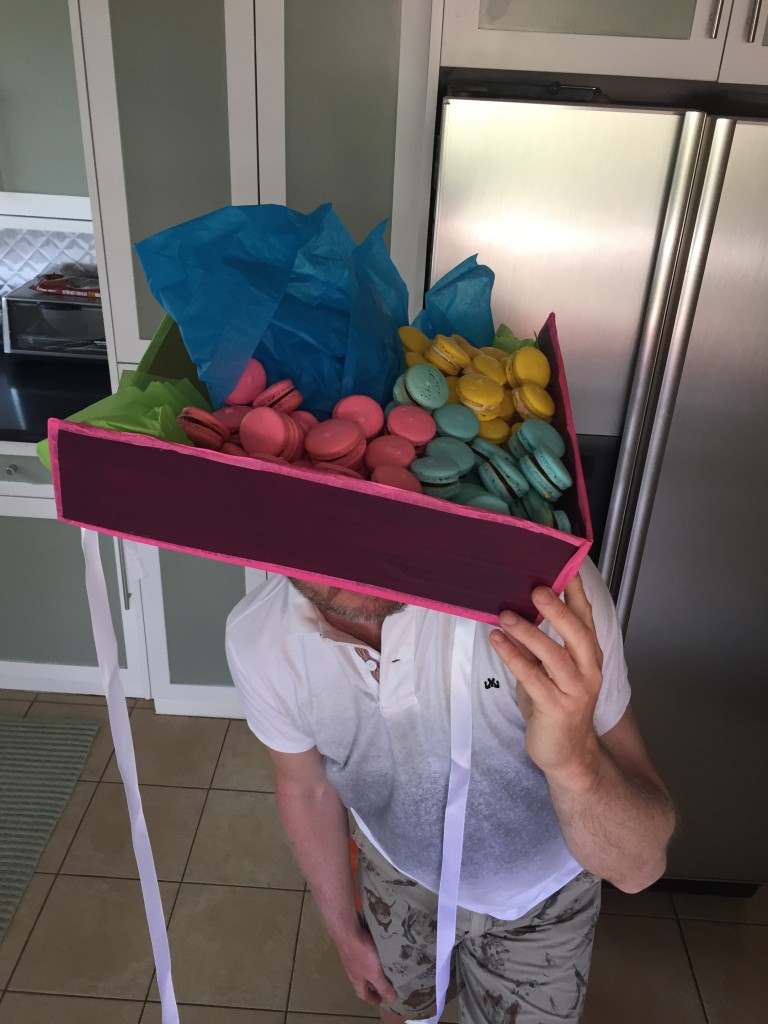 Look – you can even make them into a hat and wear them to serve at an Easter Bonnet Party!!!

2 Responses to Mad for Macarons!