20 July – Day 7. Back to El Pescador de Estepona it was so good on the first visit. We had a small taste, a Spanish amuse bouche of sorts, of gazpacho with an avocado purée on the bottom. The table shared a ensalda mixta, pulpo al la gallega and a roast pepper salad. All was wonderful but the pulpo (octopus) was amazing!! It was tender like I’ve never had before, served on top of sliced boiled potatoes, with olive oil and some sprinkled paprika. For the main course, it was urta a la andaluza. Urta is a type of seabreem; the roasted it whole in the oven over sliced potatoes, green and red peppers, onions, and LOTS of garlic. The waiter brought the fish out in a roasting dish to show me before – it was so beautiful I gasped, then forgot o take a picture. They removed the fish a plated it for me. I was a happy camper!! And flan for dessert, and bottles of liquor on the table after that and coffee. 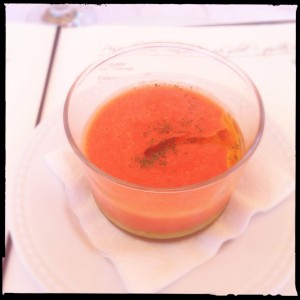 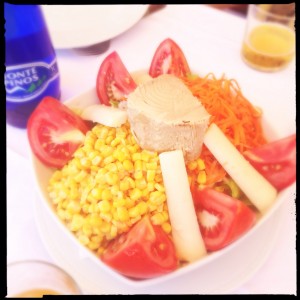 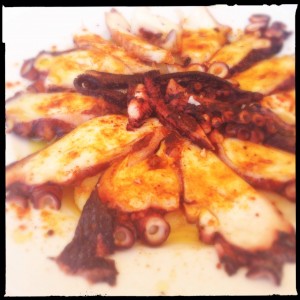 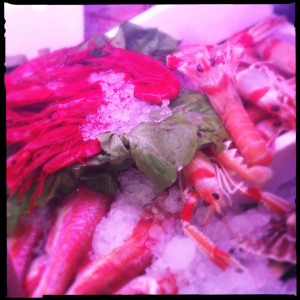 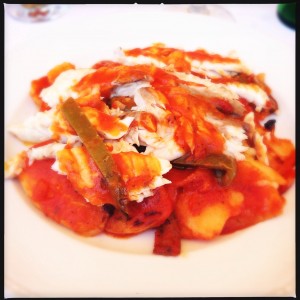 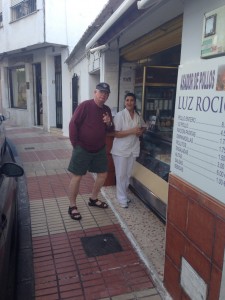 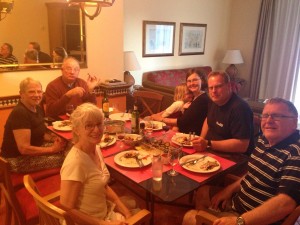 18 July – Day 5. Benahavis for lunch today. The favorite restaurant, Lindaraja, has closed. Sadness. We walked around and chose a place with a nice view. As usual, us Americans were the first ones there at 1330. The meal was ok, but the best part was the Oloroso sherry served before the meal and brandy or other liquor of your choice served after. On the house. The chorizo de agua was pretty good as well! I had gazpacho, rabo del toro (ox tail), and flan of course.

17 July – Day 4. I’m going to be fat as an Iberican pig by the time I leave this country. Oh well. My only saving grace is that breakfast and dinners are small. We went to Estepona for churros y chocolate this morning for las onces. Breakfasts are usually small and lunches are late (like 2:30 or 3) so there is usually a sweet snack around 11. I LOVE Spanish churros – fresh made in olive oil to order. If you want sugar, it comes with two packs you can sprinkle on your own. That’s ok because of the chocolate. OMG the chocolate!! It’s so thick a churro can almost stand up in it. Dipping is the best. You can have your own cup of chocolate, so double dipping is mandatory. 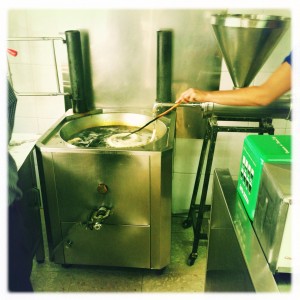 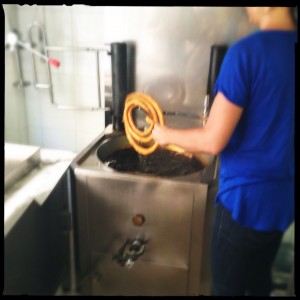 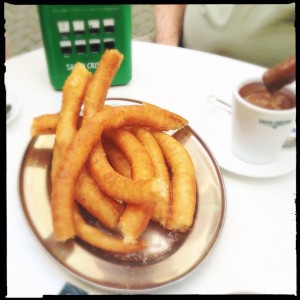 After a little light shopping and sight seeing, we decided to stay in Estepona for lunch instead of driving 20 min away to Marbella. What a find – El Pescador de Estepona, right on the beach walk of Estepona with views of Gibraltar in the distance. At 1:15 we we the first people at the restaurant. We weren’t sure about it because it was empty, but around 2 the phone started ringing and reservations signs went down. By 2:30 the joint was jumping. And our food was excellent. More than excellent. Stupendous! Gazpacho, tomato and anchovy salad, and a mixed seafood fry that had more things than I could count: shark in adobo, puntaitas (tiny tiny whole baby squid), calamari, whole fried anchovies (bocarones malagueños), salmonetes (little baby salmon like fish), and fillet of fish. All battered and fried. Delicious. Followed by a cafe solo. And then a bottle of cold liquor plopped on the table with 5 small glasses and our own devices. Life is good. 🙂 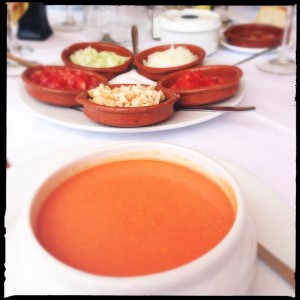 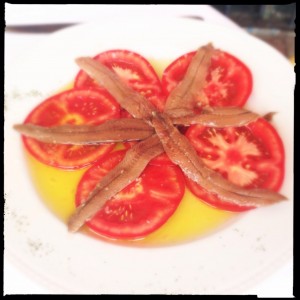 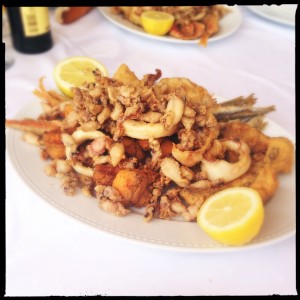 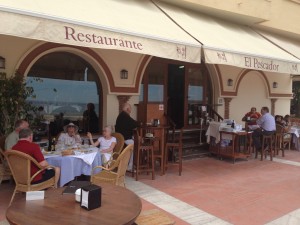 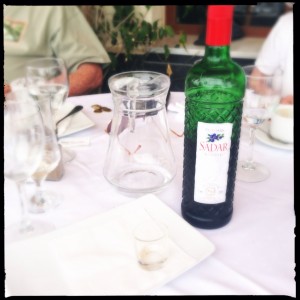 16 July – Day 3. Most favorite restaurant, Lidaraja in Benehavis, has closed for as of yet undetermined reasons. 2nd favorite restaurant, Taberna Alabardero (beach club branch) was on the short list. Equally as good, but different food. Taberna A. is known for fresh seafood and rice and paella dishes as it is right on the beach walk. 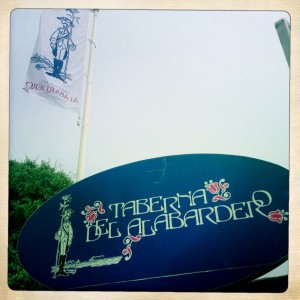 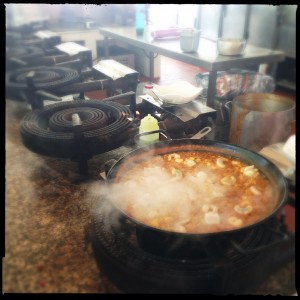 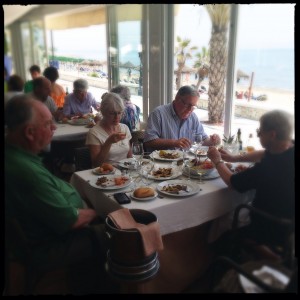 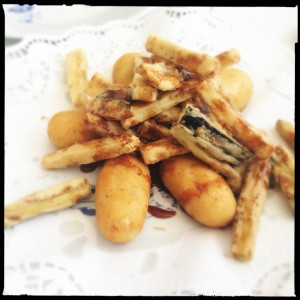 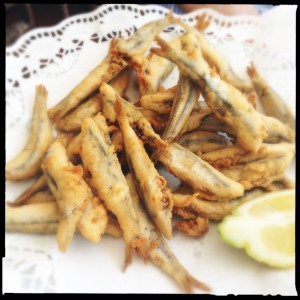 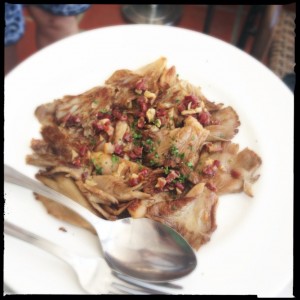 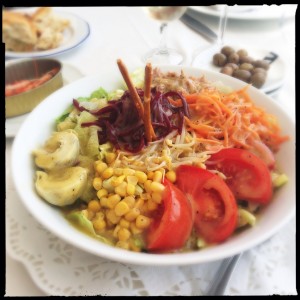 After that, Dad and I split arroz negro con calemar y pulpito. Yum! Others at the table ordered fiduea con langostinos, and mom stuck with grilledlupina ala roteña, a sea bass with ratatouille almost. Dang those shellfish allergies! 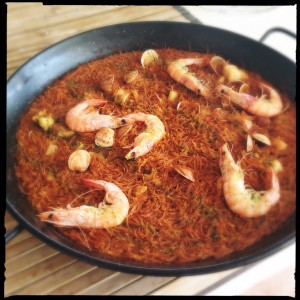 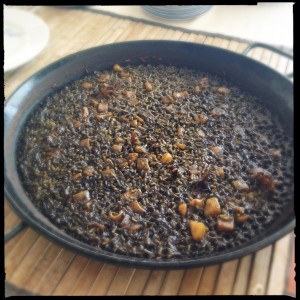 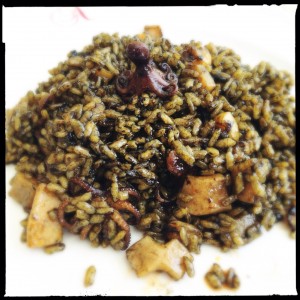 15 July – Day 2. We ventured up to Casares, a pueblo blanco about 35 minutes away from the resort. We found a place next the mirador (lookout) and had the menú del día. The menú is a two course meal with a drink and dessert included. Usually there are one or two choices for each course; we had 5 choices for each! I started with Gazpacho: 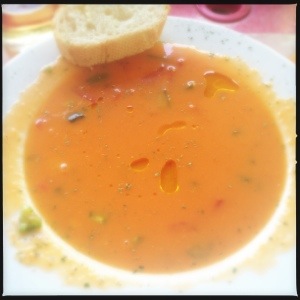 Followed by boar stew (estofado de jabalí, made with local wild boar. SO GOOD! It was exceptionally trimmed and lean, seasoned so well, lovely with a piece of crusty bread. 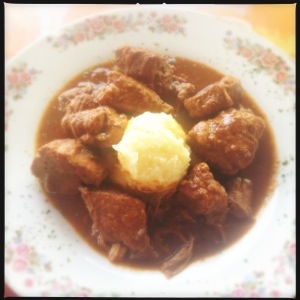 And dessert: flan of course. Spanish flan is amazing! Made with whole milk, and maybe just a touch of vanilla and a hint of cinnamon, if even. It’s not a heavy cloyingly sweet dessert, and served super cold! And served with ice cream, because there wasn’t enough dairy in this dish… 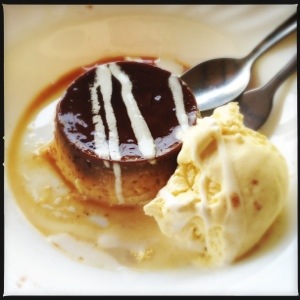 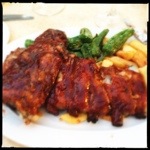 Ok, so it might not get all that adventurous as I am mostly going to be hanging out at a time share with my parents that is crawling with Brits and other Northern Europeans. But I spare those who don’t want to be subjected to thrice daily (or more) food pictures. I get it – I’m eating it; not you. But the food is good and have had requests from other foodies, so I am going to concentrate those posts here. I think. If it works. So, ¡buena suerte y buen provecho!